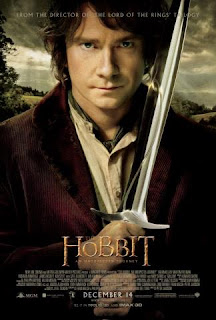 I saw the Hobbit last week. Earlier in the year I reread the book. I read it when I was 12 but that was a long time ago. So I felt that if I was going to see the movie. I'd better have an understanding of the original story.

I've spoken to some who have seen the film and heard their reviews. They felt the additions to the story were not needed and detracted from the film. I do not agree. I really liked how they added more depth to the back story. I felt that have a stronger depth to Thorin Oakenshield.

I didn't ind the addition of the white orc or how he was substituted for the goblins during the forest battle. I enjoyed the action and the fun and appreciated the dramatic moments of the film. The goblins eagles, and wargs were just as I expected. I also liked the White Consul. I think it makes sense that there would be a small gathering of leaders to plan and watch for bigger threats. I got a kick out of the scene with old Bilbo and Frodo. It was taken from the beginning of the Fellowship book so it was good finally seeing that scene.

It was good to see Sir Ian McKellen again as Gandalf. While Sherlock star Martin Freeman did a perfect job as Bilbo. Andy Serkis gave me chills as Golum. Very inspirational for my writing.

So all in all I loved the film. Can't wait for the blue ray.

Of course some think it could have ended differently...
Posted by Scott Bryan at 10:00 AM No comments: Links to this post 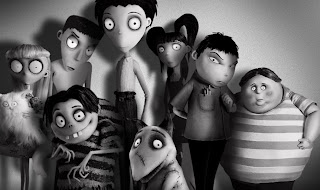 I finally saw Frankenweenie. I really enjoyed it. I purposely stayed away from spoilers because I'd already seen the live action from several years ago. I knew the story. I liked the story but I didn't understand why we needed a claymation treatment of it.

Tim Burton was able to throw in all sorts of treats into this film. Of course the whole thing is a tribute to Frankenstein and the Bride of Frankenstein but what I didn't know was all the many other tributes to classic horror.

I mean we see Boris Karloff and Vincent Price immortalised in clay. We get tributes to werewolves and vampires and mummies and gremlins and even Godzilla.

Excellent. I love the classics and this film served it up in spades. A must own for me.

Posted by Scott Bryan at 8:26 PM No comments: Links to this post 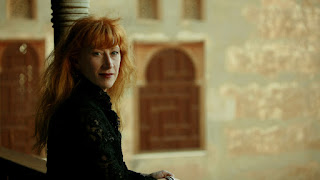 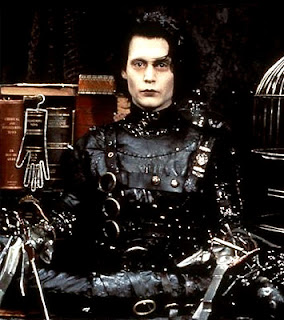 I'm going to pass on a great question from J. A. Bennet, What music inspires you the most? For me it's Lorena McKennit for NightChildren & Myths, Danny Elfman for Night Children and the LOTR soundtrack for Myths. How about you?
Posted by Scott Bryan at 12:32 PM No comments: Links to this post

Annabelle’s cold fist smashed through the zombie’s ribcage.  With her other arm she wacked off the creature’s head, sending it spiraling into a tombstone.  If she were human, these things would scare her, but she hasn’t been human for a long time.


Her brother Roland, laughed as he ripped a zombie apart and began to move at top speed around the graveyard, smacking the undead with a firmly held corpse.  His weapon of choice crumbled in his pale hands.  “Darn.  These things just don’t hold up like they used to.”


She smiled as she slashed a zombie in two with her nails.  “Whoever reanimated this horde didn’t take their time with the spell.”


Annabelle looked across the misty graveyard.  Gross bodies continued to shuffle from their graves.  Grey fingers clawed to the surface, revealing more decrepit enemies to fight.  So far none had escaped the sacred grounds of the cemetery, but with the sheer amount of undead, she knew it wouldn’t be long.


“And why zombies?” Roland asked as he unsheathed his silver cutlass.  “It’s so last week.  Why couldn’t it be living skeletons or mummies?”  He began to slash away at the horde, the moonlight reflecting off his sword.


Annabelle took to the air, hovering just out of the grasp of an undead man in a tux.  Half his rotten flesh seemed to fall off on its own.  “Could be worse.  They could be gremlins.”  She brushed off pieces of shredded corpse from her clothes.


“Ugh!  Please not those again.”  Roland flew into a mass of petrified bodies and began to slice them to shreds.  His blood-red eyes flickered and a wicked grin stole across his pale face.


Annabelle continued to hover ten feet above the graves.  She focused on anything unusual.


“You’re enjoying yourself.  Not a bad way to do our ‘sibling night’ patrol.”  He smiled as he continued to destroy more zombies.


“Still,” she continued from eight feet above, her red jacket flapped in the cool night breeze, “Something’s not right.  Zombies are normally weak, but these are pathetic.”


“Are you going to hang up there all night while I do all the work?”  His black jeans and sweatshirt began to turn grey with zombie remains.  “I’m working up a thirst.  We haven’t even gone hunting for breakfast yet.”


“You and your stomach.  I’m sure we’ll find a plump cat or dog to feed on soon enough.  Do you smell that?  There’s a hint of magic in the air.  I think one of our enemies left some kind of voodoo trinket somewhere in the graveyard.  If I could just spot it...”

For more check out Dark Threats at your local online store. Links to Dark Threats on the web can be found on the Store Page on this blog or you could just go here, Dark Threats on Amazon.
Posted by Scott Bryan at 6:00 AM No comments: Links to this post

Who's Who in the Annabelle Universe? Falabranwyn 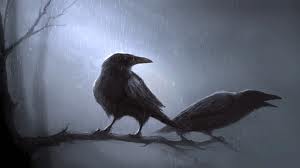 Physical characteristics:
All the Falabranwyn have the same physical characteristics. They have silky black hair and black eyes. They have a pale completion and thin bodies. They wear cloaks that seems to be made of black feathers. When in bird form they appear as crows or ravens, depending on their moods. Either way they become a black birds with eyes that seem almost human.
Personality:
They tend to be quiet and reserved. The younger members of their species are not as quiet and make more mistakes. Most Falabranwyn give off an air of knowing more than those they advise or warn.


Abilities:
All Falabranwyn can shape-shift to appear as ravens or the larger crows. They have prophetic abilities as well, often receiving visions of future events. They don't all get the visions or dreams at once and some get more. The Falabranwyn can blend into the shadows and not be seen when they wish. They cannot be heard, seen, smelled if they want to disappear. They have no scent at all. This is a protection against vampires discovering them.

History:
The Falabranwyn set themselves up as watchers and guardians of humankind long ago. In the Old Times there were many metamorphs (creatures that could change their shape at will). The Falabranwyn were one of the smarter, regal, prophetic and more organized of these species.

At the end of what would be called the Exodus War all the mythical creatures left Earth for another world called Farnalla. The Falabranwyn volunteered to remain on Earth to keep guard in case Domi, Lord of the Dark Legions, escaped his other-dimensional prison and once again set foot on Earth. The collective consul of magical beings knew that two of Domi's followers, Roxana and Lucretia, had escaped during the war. The warlocks performed a permanent spell on the Falabranwyn so that vampires could not sense them. This would allow the Falabranwyn an edge against the vampires.

They control the dimensional gateways to the

The A to Z Challenge! 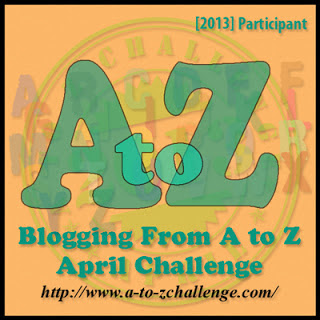 I'm joining the A-to-Z Challenge. Basically you post every day in April (except Sundays) with something involving a different letter. So April 1st is A and so on.

Click the link in the last paragraph or on the picture on the side bar to the right and check it out!

Coming in April!
Posted by Scott Bryan at 8:15 PM No comments: Links to this post

Labels: A to Z Challenge, blogging

I've never seen the show Naruto. I'm sure it's great, but my time is already limited. At any rate, a good friend from work, Rick Anderson, quoted the show on Facebook last Saturday night.

"It's not the face that makes someone a monster, it's the choices they make with their life."

This is one of the biggest themes in the Night Children series.

See, you have a vampire. A blood thirsty monster of the night who hunts and kills. Sure, she's a child and she kills animals and CHOOSES not to kill people, but technically she's considered a monster.

Then you have Hawke, the vampire hunter. He's a human who tries to rid the world of vampires and other creatures. But he's means and will stop at nothing to get his goal. He CHOOSES to hurt anyone and everyone who gets between him and his undead targets.

Who is the real monster?

Life gives us labels but we make the choices as to what we do with those labels.
Posted by Scott Bryan at 8:00 AM No comments: Links to this post