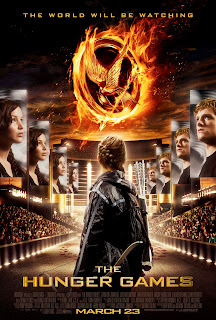 Hollywood has always pulled ideas from the literary world. As a struggling author my ear is constantly to the book-to-movie world, curious how it all works. True I don't read many adult novels so I don't follow their movie conversions. I write Middle Grade (think 11-14 year olds or Jr High School) and I read Middle Grade and Young Adult. I even plan to write YA at some point as well.

So when a MG or YA book makes a lot of noise I hear about it. When it's scheduled to get a movie I hear that too. I knew Hunger Games had the movie treatment coming and was curious. Yes I love super heroes, time travel and monsters but I've enjoyed my dark future fiction before. I've only discovered it in comics, TV and movie but why not try the books and see what the fuss is about?

It helps that I've got kids in Elementary, Jr High and High School so they have their collective ears on what's hot in fiction.

As some may have seen in my Goodreads account, I recently read all three books and enjoyed them. They are a tough read and deserve the young adult category (13-18) due to strong themes and violence. Regardless they show themes we need to explore, big government, forgetting the little guy, losing oneself in reality TV and instant gratification, sacrifice and finding out whats really important in life. I borrowed my daughter's copies and read them. Couldn't put them down.

I was concerned about the violence and graphic nature of the book. It's fine for the actual book because it's age specific but a movie would be more shocking due to actually seeing the killing and strong events and themes. I decided to not let my 14 and 11 year olds see it. I went with my 18 and 16 year olds and my daughter's close friend.

I suspected the PG-13 rating was due to the themes more than the violence, and that the violence would be handled in a safe matter. I was right. Sure you have a blood bath at the cornucopia but it's handled with brief moments and no actual weapons in flesh. In other words the attackers charge the victims, we flash away and then when we go back the victim is dead. It's an old Hollywood trick that works well here. There are occasions where we see weapons in kids but it's simply after the violence and actually not bad.

The movie portrayed all the themes listed above in a very real manner. The book is 1st person from Katnis' perspective.  These is a great deal of emotion in those words. Most of it deep inside feelings about her world and those who inhabit it. Jennifer Lawrence showed this through her face and acting. As did Josh Hutcherson in the role of Peeta. He showed his stuff in Bridge to Teribithia and shows it even more so now. Woody Harrelson could have played drunk Haymitch with comedy but instead he gave the role dignity. He played what mattered in this character who gave up on the world, gains inspiration from Katniss and Peeta and changes who he is. I expect a Best Supporting actor nomination.

Suzanne Collins, the author of the series, was one of the executive producers and it shows. This movie was the closest I've seen in book-to-movie translations. Yes they gave us a glimpse of the game makers and some brief moments with President Snow. All the better to build up to what's coming in the sequels. Yes the creatures at the end were altered but I didn't want to see an exact rendition of those. Yes she gets the Mockingjay pin from the Hub, causing the Mayor's family to be written out. But there just isn't time for every character in the book and quite frankly they never really amounted to much in the books anyway.

The book still had all the important events and fell from the book. Very well executed and yes, my 14 year old can see it after all. Maybe even my 11 year old, too.

I give it five out of five stars.
Posted by Scott Bryan at 7:54 AM No comments: Links to this post