Wrote a new couple of scenes...

As I got to the halfway point in the novel, tightening the POV and showing more, I finally reached the changes I recently did with Annabelle.
At the beginning of Chapter 20 (the Hawke chapter) I wrote two new scenes where we experience Annabelle's awkward advancement from a 10 year old body to a 14 year old body. Then I wrote a couple of telling paragraphs on Roland's age advancement.

Well, once I reached that chapter in my personal read through, I discovered just how much it suffers from the telling of Roland's advancement.
So last night I broke the whole age change scenes into their own chapter. A new chapter 20 where I show Ann's change, the consequences and Roland's change, with some brief consequences. Roland has to be brief (all show, no tell, don't worry) because one of my rules is it's a birthday event and so that means it leads right into the Hawke chapter.
It worked out great because the chapter ends with Roland getting shot by Hawke. Cliffhanger!
I can't wait to read it to the kids in a couple of days.
Posted by Scott Bryan at 6:52 AM No comments: Links to this post 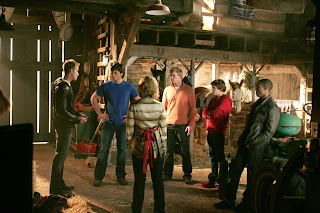 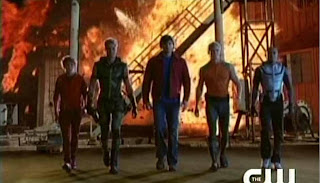 I enjoyed last night's Smallville.
This is a rare thing for me. See, while I'm a big super hero 'geek' I normally can't stand the show. I do watch it, because I want to see how this dying show limps itself into a corner.

But last night was very enjoyable for me. Yes, I know it was corny, with all the tips of the hat to the Justice League comic, but that was what made it fun for me.
Sure, hard core DC fans would argue that Cyborg should never be the same age as Clark (I said that during the Cyborg episode)but that didn't bother me this time.
I suppose I was just swept up in the entire Justice League tribute.
And Bart got the name he should have! And a costume!
Aquaman didn't do a whole lot but that's always a problem with the character.
They made Cyborg closer to his comic self. Jet Jackson did a great job with him, again.
This was a wonderful way to send off Green Arrow.
I hope we see these guys again.
Posted by Scott Bryan at 6:43 AM No comments: Links to this post

Still busy working on the Manuscript. I'm ahead of schedule. I'm finding all of the POV problems and other things that need changing and fixing them.
At night I read it out loud to the kids. I'm catching sentences that don't read as well as they should and I'm fixing them.

So that's where I've been. Sorry for the dry blog spell.
Be back soon.
Posted by Scott Bryan at 10:00 PM No comments: Links to this post