I’m stunned. I mean, sure, I thought it was finished before, but now it truly is. Baring in mind the manuscript will endure harsh betas and editors, it’s finished.

To understand how momentous this occasion is, let me give you some back story. Back in 2004 I began with a simple idea about vampire children trying to learn how to be creatures of the night while staying true to their human natures. I wrote a story that continued through their first seven years in a cabin in the wilds of Colonial America.

Then I threw a curve ball and brought in enough conflict to tear apart the children. The boy traveled the Caribbean with vampire pirates while the girl searched for him in post fire London. I never finished their separate adventures and never reunited them.

Instead, I rethought my book and focused on their first seven years in the colonies. I saved their separate adventures for book 2. After finishing book one, editing it, getting it reviewed by betas and editing it again, I eventually returned to the 2nd half.

I wrote half of the 2nd book and discovered it was very long. So I ended it on a cliff hanger and still the siblings didn’t reunite. One problem (well, lots of problems), the book sucked. There were things in need of cutting and quite frankly the story should remain a stand alone book. The kids had to find each other.

So I revisited the 2nd book and rewrote the stuff I had. After a long while I found my true ending and now, today, it’s actually complete. Annabelle and Roland have reunited at last!

I’m so excited!
Posted by Scott Bryan at 9:58 PM No comments: Links to this post 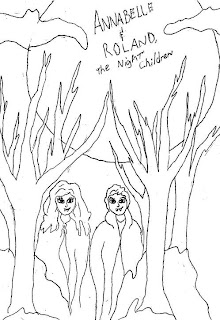 THIS is what I imagine the cover of my book to look like. Of course writers don't get that choice and I'm far from getting published, but if I could, this would be it. Well, this as done by a real artist, but you get the idea.

Maybe more dark shadows where only their silhouettes and red eyes are shown.
Posted by Scott Bryan at 9:15 AM No comments: Links to this post