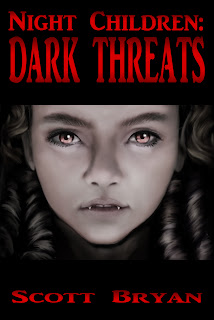 My novella, Night Children: Dark Threats, is now at the Purple Cow children's bookstore! Come one, come all to grab a copy.

It'll be at the bookstore, located in Tooele Utah, for a 90 day trial period. If it sells, they'll want more.

Please, if you're able, come grab it and help a local author out.

You read that right, Night Children Dark Threats will be on thier shelves!
Posted by Scott Bryan at 10:00 AM No comments: Links to this post

Book Review: The Son of Neptune (Heroes of Olympus #2) 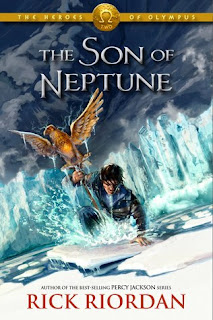 I absolutely loved it! As always, I find Rick Riordan’s writing refreshing, exciting and inspirational. I couldn’t put it down and found myself flipping pages way too quickly.


Its fun seeing Percy, Tyson and Mrs. O’Leary again. It’s also great being in Percy’s head. I could always relate with him. Frank and Hazel are also very strong, well-written characters, too. Darn you Riordan! All seven half-bloods are wonderful. Who could we possibly sacrifice?

It was nice seeing a brief glimpse of Jason, Piper and Leo. This book performed an amazing job of following the last and leading to the next tale. Can’t wait to see SPOILER again.

Adding to my personal list of “Things That Prove Riordan is a Fellow Comic Geek”, we have a super-speed horse that uses the Flash’s run-on-water technique, questions about amazons that would make one think of Wonder Woman (i.e. talk of what powers they do and don’t have), animal shape-shifting abilities and a possible mention of Beast Boy, more talking to aquatic animals like Aquaman, and more trick arrows like Green Arrow and Hawkeye (as seen before with the Party Ponies). Yes, I keep a mental list. I think it’s cool that he draws inspiration from one of the places I do.

Anyway, I loved this book and cannot wait till the next!
Posted by Scott Bryan at 1:39 PM No comments: Links to this post


Annabelle and Thomas hurried outside to find the entire camp gazing into the forest, their eyes searched for the source of the terrible sounds.


The eerie howling took her back decades ago, to a single night when she, Thomas and Eliza looked for her brother on a dirt road through the wilds of Massachusetts. It was the first time she’d heard a werewolf. The strange mix of human and wolf calls made her hairs stand up on end.

This time it was far worse. A large choir of wolf creatures sang to the bright full moon. Their song grew louder from three sides around the camp and oddly enough, the vampires and humans didn’t seem concerned. In fact, a small glow of excitement crossed their features.

By contrast, Thomas, Roland, Eric and Mary stood as ridged as Ann. Charlotte clung to Mary for protection while Selina and Samuel perked up, curious about the coming threat.

Fear gripped her as eerie yellow eyes dotted the darkened wood. They were surrounded by too many rapid heart beats. Things that smelled of musky fur hungered, obscured by the thick trees.

A large red beast pushed out of the foliage, followed by five more of similar build. Each werewolf stood on two hairy legs and were adorned in patterned kilts with bright sashes across their chest.

The large red one sniffed the air as Yoska stepped forward. His bright red eyes locked with the werewolf’s yellow pupils. Each stood firmly, as if daring each other to attack first. Annabelle’s breath caught in her chest.

Who's Who in the Annabelle Universe? Roxana Dawn: Bride of Domi

﻿THE THREE QUEENS / BRIDES OF DRACULA 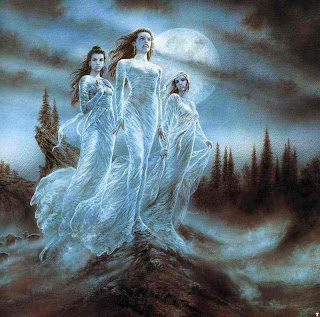 This is the closest I have to a pic of them.

artist:(if you know the artist, please let me know so I can credit him or her).

What:
Their mission is to watch over Domi's interests and keep an eye on the Seven Tyrant Lords.

Physical characteristics:
Pale complexion, short black hair mostly bobbed Ala a 20's "Flapper" girl. Thin, small body. Girlish round face. Small dimple on her left cheek. Likes to wear "Flapper" girl styles such as long dresses and plenty of long necklaces. Used to dress like a western show girl back in the mid-nineteenth century. Used to wear gobs of make up like her sister but gave it up. Loves to wear white lace. She always wears lace gloves.

She has a sweet disposition but is actually a terrible back biter.
Abilities:

She possesses the abilities of all vampires. This means she is faster and stronger than humans, her senses are extremely acute as are her reflexes. She can fly, turn into a bat, wolf, rat and she can mesmerize humans.

Special abilities:
She can control almost anyone, human or creature, with her voice. As soft and high pitched like the tinkling of a bell, Roxana's voice can control a person's body, allowing her to make her victim do anything she wants. Has no affect on Dominic or Elizabeth Báthory. She also carries a small silver blade with a leather handle.

Roxana lived in ancient Rome with her older sister Lucretia. While Lucretia was more obsessed with her looks, Roxie developed a passion for Dominus.  She became very loyal to him and jumped at the offer of vampirism. Trained by Dominus’ chief General, Adad, to be great fighter. Along with her older sister, she has always dreamed of being on of Dominus' Three Queens.

Domi commanded Lucretia and Roxana to hide during the Exodus War. They rejoined him one he escaped his prison in the Dark Place. She has been an active follower ever since.

There is much left to discover about Roxana's long, evil life.
Posted by Scott Bryan at 6:00 AM Links to this post