Once again, this Bite of Story Thursday will show something I'm currently working on. Keep in mind, any preview bits like this is due for changes upon future reviews.

Lyndi let out a surprised scream as something huge and green pushed her into a thick tree trunk.  She fell to the ground, dazed.


“Oh my stars and tree nymphs,” Frunz exclaimed.  “What is that thing?”


A locust the size of a rhino kicked the dazed Lyndi into another tree, knocking her unconscious.


“That’s my best friend, you over grown cockroach!” Flitty sent several pixie-bolts at the bug, which made it back up.


Eli notched an arrow but before he could let it fly, another giant locust landed in front of him.  Its wings knocked him down, along with Heilgar and Celeste.


A third locust landed behind Frunz and Mark, prompting both to scream and duck for cover.  The large insect let out a blast of sticky goo which covered Flitty and plastered her against a tree trunk.


“Yuck!  Do you know how much this dress cost?”  She tried to pull out from the stuff but it held her tight.  “Little help here.”


“I’ll put you on my ‘things to do’ list,” Eli replied as he let several regular arrows fly.  One punctured a locust’s eye while two others pinned its wings to its body.
Posted by Scott Bryan at 6:00 AM No comments: Links to this post

Who's Who in the Annabelle Universe? Gertrude

Physical characteristics:
Physically Gertrude is weak due to her advanced age. She has grey eyes and hair and a permanent scowl on her face.

Personality:
Angry, uptight and in need of constant control. She answers only to Dominic Pratchet, the vampire lord. She hates children, Dagda and the North American Coven of Warlocks and just about everyone. She has no patience for less experienced witches or warlocks.

Abilities:
She is an expert witch with an arsenal of spells and the skills to match.


Known History:
Not a lot has been revealed about Gertrude's history. Once she was part of the North American Coven of Warlocks. She became corrupted by Dominic at an early age but the master vampire never actually turned her. Still, she remained in his service as a spy until found out by Dagda and exposed. She took part in many of Dominic's North American schemes and trained Penelope Chesterfield.


Posted by Scott Bryan at 6:00 AM No comments: Links to this post

Labels: Gertrude, Who's Who in the Annabelle Universe? 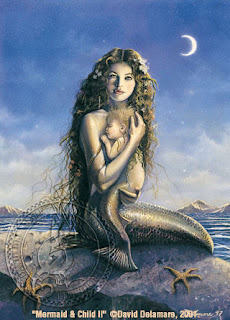 I just watched a documentary on Animal Planet. Yes, you guessed it. It's called Mermaids : The Body Found. They were very convincing in their evidence and almost got me going except some of the experts clearly seemed to be acting and the "actual footage" was clearly false and in one case extremely computer generated.

They did a great job leading up to their results. Nice use of drama. Of course it's all bupkis. I mean there was beached sea life a few years ago and there was an unexpected "Bloop" sound recorded, but everything else was just pure fun.

I did some research and apparently many people thought it was real. I could see how they would because the docufiction was pretty compelling. Guess the government and NOAA (National Oceanic and  Atmospheric Administration) both had to issue statements that mermaids aren't real. Sigh. It's 1939 and the radio broadcast of HG Wells' War of the Worlds all over again.

Regardless, the docufiction sure got me in the mood to tweak my mermaid chapter in Myths. Sure, they may be fake in the real world, but in fiction, anything is possible!
Posted by Scott Bryan at 6:00 AM No comments: Links to this post