On a warm night when crickets echoed and fireflies danced along the dirt path, Annabelle and her brother Roland walked their human friends Thomas and Polly Dunston home.


Annabelle loved these quiet nights.  Most evenings she would hunt the forest for animals, searching for blood to quench her eternal thirst.


Once a week she and Roland would wake their friends and run in the forest and play.  It reminded her of when she was human, before her parents died and she became a vampire.


She watched Thomas laugh with Roland.  The blood pumped through Tom’s veins, an invitation she swore to never take.


Vampire life wasn’t the best.  Annabelle could handle never seeing the light of a beautiful day again but her meals were awful.


While most eleven-year old girls slept peacefully at night, she stalked the woods near their colonial town, hunting for blood among the wildlife.


She couldn’t believe that only a few months ago she played in the streets of , a human girl without a care in the world.


Little Polly shivered a bit as she chanced several frightened looks into the imposing forest that surrounded them.  “Are you sure it’s safe out here?  You said there were lots of monsters in the woods.”


Before Annabelle could respond, Thomas puffed out his chest and said, “You’re fine.  We’ll protect you.  No monster would dare hurt you with your big brother around.  What?  Why is everyone laughing?”


“Actually I don’t think it will.  With the magic barrier up, all Dominic’s servants are trapped outside.” Annabelle explained as they continued down the path.


“Not all of them.”  Roland corrected.  “What about those two witches?  Their cabin is inside the barrier.  They’ve already caused us problems.  They could be hiding just beyond those trees.”


He pointed ahead into the thick forest.  Polly and Thomas’ eyes grew wide.


Annabelle threw her brother a sharp look.  It didn’t stop him from laughing.  “Stop scaring them.  With all the trouble going on in , those witches wouldn’t dare show their faces.”


She put her arm around Polly and gave her a squeeze.  “You’ll be fine.  If they did try to get us, Roland and I will protect you.”


Thomas threw a stone into the glowing bugs, scattering them.  He turned to Roland, “I still don’t think it was very fair to float above the trees when we’re playing hide and seek.”


“I wasn’t cheating.  I’m a vampire.  Why can’t I use my abilities to work for me in the game?  It’s the same as you and Polly running or climbing a tree.”


“No, it’s not.  When you fly, you can look down and see us.  That gives you an unfair advantage.”


“I can’t believe this.  Annabelle, what do you think?”


She shared a smile with Polly while they walked behind the boys.  “You were cheating.”


“What?”  Roland spun around, holding a stick to his chest while rolling his glowing eyes.  “Ouch!  By my own sister, betrayed.”


Polly giggled.  “I wish Ma and Pa could join us on nights like this.”


“You know we can’t reveal ourselves to anybody else.” Annabelle reminded her.


“Maybe so, but what if Dominic captured them to get to us?”


Roland tossed his stick at another batch of fireflies, “He’d do that anyway.  I don’t know if anyone is safe.”


“People have started to notice the strange shapes in the forest beyond where you said the barrier is,” Tom added.  “They hear the noises Dominic’s monsters are making.  They don’t know what it is, but we know they’re out there, waiting.”


Polly slumped her shoulders, scuffing her feet as she walked.  “I understand.”


A twig snapped ahead in the darkened wood.  Annabelle and Roland stopped in their tracks and stiffened.  Two heartbeats pounded nearby and Annabelle silently chastised herself for not listening closer to the surrounding woods.


“Smell that?” she whispered to her brother.


“Yeah,” Roland agreed.  “The breeze was blowing the other way before, hiding their scent.  It’s them.”


Two familiar women hid just ahead.  Menace oozed off of them.


“Who?” Tom peered into the dark wood fearfully.

Who's Who in the Annabelle Universe? Mary Stilton


Physical characteristics:
Mary has black hair and a thin build. Her eyes used to be green before she became a vampire. After her transformation they take on the normal red color.

Personality:
Mary is very quiet and thoughtful. She is studious and loyal. She cares deeply for her fellow orphans. She behaves as a big sister to the others and follows her guardian, Molly O' Connell, without question.

Known History:
A resident of London England, Mary lived with her parents. They were well to do and wanted their daughter to be taught the finer things so they sent her to boarding school. Molly O' Connell was Mary's teacher. When Molly rejected her boyfriend (whom turned out to be a vampire), he kidnapped Mary and four other children and turned them all into vampires.

Molly rejected her boyfriend and took the children into the dark heart of London where she set up the Palmer Orphanage. Mary was sixteen years old when she was turned to a vampire. She dedicated her undead life to helping take care of her new brothers and sisters by protecting them from the cruel monsters and fiends that exist in the dark world. 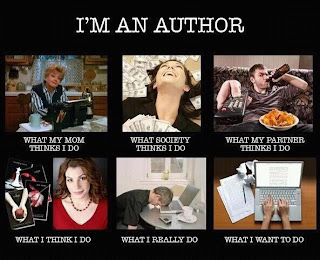 Jessica Bell from the Alliterative Allomorph blog posted an interesting article on self publishing. I wanted to share it with you.

For me personally my reason to self publish would be BIG THING No. TWO:
"This book is self-published because I spent years and years querying it, was told that the writing was great, but no agent believed they could sell it. So ... here's my book. I don't need to sell a million copies, a few hundred is enough for me. Plus it's been through so many edits after all the agent feedback, I doubt you'll be able to find one thing wrong with it."

Now I should insert here that I believe a work is never finished. There is always something that could be improved upon. Heck, maybe someday an agent or publisher will want to exclusively want to represent it but there are a few things that will need tweaking. Maybe.

So I self publish Annabelle's NIGHT CHILDREN adventures. I'll keep it up, too. :)
Posted by Scott Bryan at 8:00 AM No comments: Links to this post