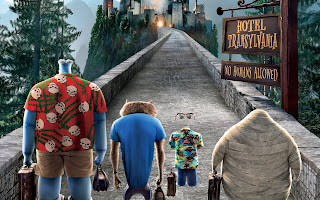 Hotel Transylvania is everything I want in an animated funny satire film of the classic monsters. It's got a full cast of creatures with only the Phantom and Hyde absent. The intro uses the classic Universal horror type music and all the trappings are there.

Of course I'm going to love this film not just because of it's monster tributes but also for the wonderful story. 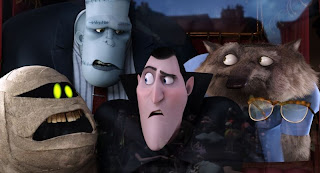 Dracula is a single dad trying to keep his daughter safe so he creates a resort for all the monsters to hide out at and achieve peace. He tells everyone that the humans are scary and evil and want to cut open their heads and put candy in them. 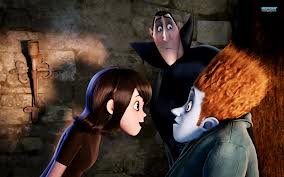 A human guy happens along, Drac tries to hide him and then disguise him but of course his daughter Mavis falls for the human anyway. Hilarity ensues.

As if all of this wasn't good enough for me to enjoy this film, in the beginning we get a wonderful segment with Dracula trying to raise his child. 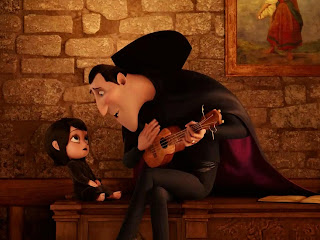 Now you know my obsession with vampire children brought on by Annabelle. Not only is it sweet and entertaining for anyone, but it has Drac teaching her to fly as a bat. Yes, you heard that right. Just like I did back in 2004 when I began the first draft of Dark Birth. Of course they do things differently and it's very sweet, but it only serve4s to make me love this film all the more. 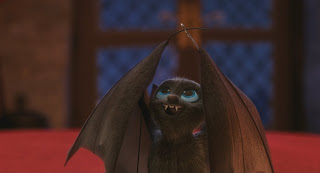 Mavis trying to sew her own cape in her bat form.
So I give this film a huge thumbs up. I didn't get to see it in theatres but I knew about it for awhile and it's so worth the wait. I consider it the modern Mad Monster Party. Check it out!﻿
Posted by Scott Bryan at 8:00 AM No comments: Links to this post

“Wow.  Was Jack right?  Did you really work for President Roosevelt?”  Scott leaned forward with excitement.


“Yes.  A number of us were drafted into special service on December seventh of ’41 but that’s a story for another night.”


“What about all those people who saw you?  How come no one’s ever mentioned axis werewolves and allies vampires before?”


Annabelle smiled, “We mesmerized them.  Their memories were hazy.  They knew there was an attack from axis spies, but nothing more.”


He leaned back and gazed up at the sky.  “You’ve seen and done so much.  It’s a miracle you’ve survived it all.”


Annabelle calmly stroked the dog’s shaggy fur.  “That’s why it’s so important for you to write my story.  People must know what really happened in history, so they’re prepared for what’s coming.  Dominic has a powerful army at his disposal.”

Really sweet. Enjoy!
Posted by Scott Bryan at 8:00 AM No comments: Links to this post

Who's Who in the Annabelle Universe? Vanessa Kimball

Personality:
Vanessa gives off an elegant air. She always behaves as if she is royalty. She liked to use people for her own desires and was not afraid to step on others to get what she wanted. This began to change after the vampire Reginald broke her heart. She secretly wanted to change her ways.

Known History:
Vanessa Kimball was of royal birth. She grew up with everything she wanted. The vampire lord Dominic Pratchet came into her life and wooed her. She became a vampire and willingly served him. Dominic named her Sovereign of the British Empire Covens. This means she became the head of the rich upper class vampires of London. Dominic did as he always does and left her.

After awhile she was bored, so she turned a group of spoiled upper class young men. They became known as the Rakes. Her personal servant and ghoul is named Chester.

Dominic constantly shifts from one empire to the next to keep an active eye on his subjects.  He returned and discovered the rowdy and frivolous Rakes and almost destroyed them but Vanessa made them swear an allegiance to him. They paid him many tributes of captured humans.

Vanessa fell in love with one of her Rakes, Reginald Worthing. He didn't feel the same way about her and used her to gain power among the Rakes and London's vampire society. Reginald fell in love with a call girl named Abigail Black and turned her. They ran away together and Vanessa's heart was broken.

She began to get second thoughts about her life and the corrupt things she did. When she met Annabelle Foresight and Thomas Dunston, two vampire children from America, she began to think on a major life change.

Hey there gentle readers. Those folks at Media Room have posted Scholastic Editors Forecast Top 10 Trends in Children's Books for 2013.

I don't try to write to trends, but it's always good seeing what is going around in the reading world.
Posted by Scott Bryan at 8:00 AM No comments: Links to this post