I'm feeling better guys. Thanks to my wife, Willard and Dani, plus some of the guys on AW (especially Triceratops, poster/published writer), I feel 100% again.

I submitted two electronic quires and prepared two snail mail ones to mail tomorrow. I feel that I should write some Parodyverse stories and let the book go out to agents. Maybe some non-New York ones, and smaller press ones. Maybe I'll try an editor too.

Anyway, I'm back in the saddle. My real problem is proper time management. I only have lunch, before and after work to write or query. That's not enough time.

I'll get it though.
Posted by Scott Bryan at 12:40 PM No comments: Links to this post

What's with the shiny castle? The snake in the ball, why? What are the trio in? Gold? Is that Harry's money?
Posted by Scott Bryan at 12:37 PM No comments: Links to this post 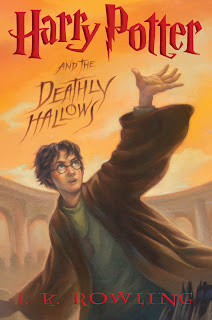 As I'm sure you already know, the cover to book 7 has been released.

Can't wait till this one! I'll be sad when it's over. If only there was a book out there that could grab people and keep them entertained.

Hmm.
Posted by Scott Bryan at 12:34 PM No comments: Links to this post

What We Call the News | Send To Friends | Funny Animations at JibJab
Posted by Scott Bryan at 12:31 PM 2 comments: Links to this post

I just received a rejection from a certain agent. This is the same agent who wrote a note on my query last October, stating that she held onto it for awhile but ultimately didn’t go with it because of all the editing.
After a great deal of editing I resubmitted to her.

Here is what she said…

“This is going to be frustrating to hear, but last fall a lot of YA & middle grade editors were looking for vampire & werewolf type novels. Now they aren’t. Trends come & go quickly. It will probably come back around again, but probably not until fall again. Or even later if the publishers don’t feel these books sold as well as they hoped.”

So what does this mean? Should I just give up and wait? Last fall? You mean last fall as in the season that she got my query the first time? It was last fall that every one rejected it. Should I have skipped the agents and went straight to the editors last fall? Is it too late now? Is she for real? Should I just quit and take her word for it? DAMN!

1.Getting started at a published writer means getting an agent and agents are fickle with what they want. The one thing that you can count on is that they expect everything to be unworthy and unmarketable.

2. Editors feel the same way as agents and even if you do by some miracle convince one that you’ve got the stuff, that your story has the stuff, they have to convince a group of editors who expect failure.

3. While you may have tried your novel with the age bracket, and they liked it and honestly wanted more, the opinions of the age bracket means squat to the professionals. You’re not supposed to tell them that readers liked it. They don’t care. If they don’t think it will sell, who cares if a bunch of kids think otherwise? Even if it’s the kids who would buy it in the first place.

4. The fiction I originally set out to do is no longer desired by editors or agents. I didn’t sit down one day and say “Hey, how about vampires?” No, the idea came to me in a powerful, overwhelming passion. I never cared about vampires, yet I had to write it. This character had to get out to schools, libraries and any where else. She had to teach and entertain children. She had to make their lives better. I feel in my bones that this is right and the thirty kids who read it feel the same way. I’m told “Write something else.” Well I have other stories in me, tons of them. But the passion is with Annabelle. The passion is with this story.

I don’t know what to do. I could, in one gust of fury, take the passion and rewrite the first two chapters, but why? Why do anything?

A small voice filled with passion, one that feels “right”, tells me she was just one agent. She’s just one opinion. The voice says to keep trying. She’s not the voice of every agent or editor. Don’t let her get you down.

On the other hand, she is a professional. Her ear is set to the industry. How could she be wrong? I’m just a clueless little wannabe writer. I know nothing. She’s clearly right and I’m clueless optimistic. I’m stupid, living in a fantasy world of wish fulfillment. I’ve lost a lot of faith in this dream. This was the straw. Final straw? I have no clue. I have little clue about anything these days.
Posted by Scott Bryan at 6:47 PM 2 comments: Links to this post

Some guys did this great job of editing.


Posted by Scott Bryan at 10:13 AM No comments: Links to this post