Chapter Four : 1899 How To Catch An Invisible Man

The shed was small and contained various gardening supplies and a stack of old bricks.  She could smell his perspiration coming from the back wall.  His heart thundered.


As if these things weren’t enough to give him away, the hovering shovel that threatened her safety moved dangerously close to her chest.  Its metal could pierce her skin, allowing the long wooden handle to act like a stake to her heart.  She needed to calm him down quickly.


Mesmerization was not an option thanks to the man’s lack of eyes.  Annabelle wasn’t as skilled as Roxanna or Fenroth.  She couldn’t transfix someone she couldn’t see.  She spoke very calmly, “Please Doctor Griffin.  Listen to me.  You must be a reasonable man.  It’s obvious you’re a brilliant scientist.  You mastered the art of invisibility.  No one else can do that.”


The shovel shook slightly, revealing how cold the man must’ve been.  It lowered an inch.  “They’re all fools.  They know nothing of the potential I’ve discovered.”


“Of course.  They were wrong to hunt you.  They don’t understand the miracles you have wrought.”


The shovel lowered, its sharp tip touched the floor.  “Exactly.  Those superstitious buffoons, they’d rather run brilliant men out of town than embrace science and all its wonder.”  The shovel now leaned against the back wall.


A long pause followed.  The kind of silence that would make a normal person wonder if he still stood there.  Annabelle could tell by his heartbeat that began to calm.


Finally he spoke again, “I must admit it’s comforting to hear a familiar accent.  I take it you’re from ?”


“Spent the first ten years of my life there and moved back for a while years later.  Some nights I miss it.”


After so many years of the same reaction, Annabelle was used to it.  “As you know looks can be deceiving.  Come with me Doctor Griffin.  I can take you someplace private.  Someplace warm, where you won’t have to hide.”


His invisible feet shuffled as he stepped closer.  “That would be nice.  I just want to be left alone.  I’ve been on the run for so long.  I can’t imagine what solitude would be like.  Time to study and plan.”

Thanks Andrea!
Posted by Scott Bryan at 5:30 AM No comments: Links to this post

I'm in the Local Paper part 2

And as promised, here is the article! Thanks to Jamison for scanning it and thanks to Brandon at Starry Night for setting it up!
Thanks guys! 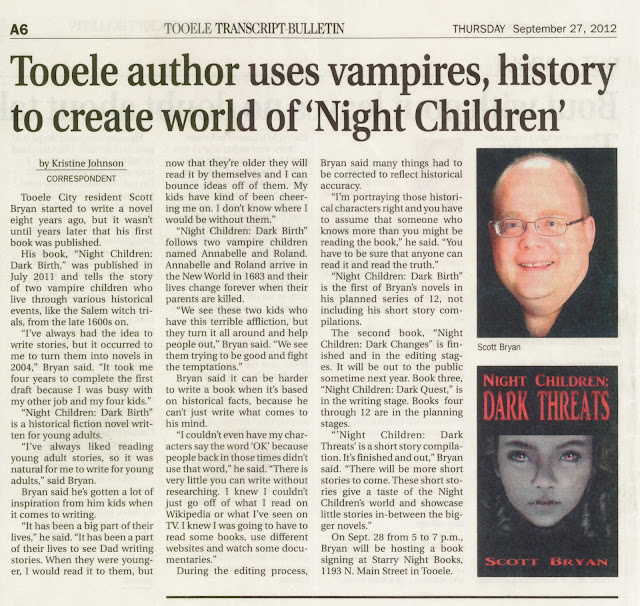 Posted by Scott Bryan at 10:16 PM No comments: Links to this post

The Store and Author Bio pages have been updated! Go see!
Posted by Scott Bryan at 10:13 PM No comments: Links to this post

Who's Who in the Annabelle Universe? Charlie

Physical characteristics:
Charlie has sandy blond hair which is always a mess. He's scrawny and always has a wicked grin unless he's in trouble by his brothers or caught by members of the Order of the Righteous Vampires.

Personality:
He followed the lead of his brothers Beufus and Cletus while they were alive or undead. They get into mischief. Scared of his older brother because of the many beatings inflicted upon him by Beufus. Often makes mistakes or says things that annoy Beufus. Always tries to be his brother Beufus' favorite when the brothers were alive or undead. After their deaths, Charlie would do the same for Dominic. He spies on others and tattles as a way of earning favoritism. He has an awkward laugh and always gives off a creepy vibe. He is stuck as a teenager for a few hundred years. If he can survive vampire hunters and pissed off vampires, he could advance to adulthood eventually. Knowing Charlie's tendency to annoy others, that would be an incredible feat.

Abilities:
Charlie has the basic vampiric abilities; strength, speed, stamina, sharp nails that are used like claws, enhanced senses and the ability to heal from most small injuries. Like all vampires, he can't handle sunlight, wooden stakes to the heart or beheading. Each of these turn him to ash. Like all evil vampires, religious artifacts harm him as well. He has not learned how to transform or fly. He can maneuver perfectly. He has learned to dodge and escape others clutches, missing danger by inches. He learned that skill as a means to stay alive. He can hide extremely well and perfected his spying technique.

Known History:
Charlie and his brothers lived in Jorgantown all their lives. They were satisfied with scratching out a small living doing dock work and hiring themselves out for farm work or cabin building. Their evenings were spent drinking at the pub and occasionally causing a ruckus in the town.

The night they finally met Eliza Pratchet, the supposed town witch, was their last night alive. They teased her, only to have the recently arrived Foresight family try to defend her. Something in Eliza's eyes made the brothers forget what they were doing and instead they found a quiet spot to sleep off their drink.

The vampire Fenroth happened across them and seeing the stocky built of Charlie's older brothers, Beufus and Cletus, turned the two of them. He ignored Charlie because the boy was too scrawny and beneath his notice. Once a human has been bitten three times he or she begins to change. The transformation to vampirizim isn't always over night. The older the human, the longer it can take.

After the white warlock Dagda set up a magical barrier around Jorgantown and the surrounding woods as a means to protect Eliza and the vampire younglings Annabelle and Roland Foresight.  The barrier would prevent any dark creatures from entering. The vampire lord Dominic Pratchet  knew he would need inside agents to enact his revenge on his estranged wife, Eliza Pratchet, and the two children Eliza betrayed Dominic for. Realizing Fenroth's newest subjects were still in the incubation stage and therefore not dark creatures yet, Dominic commanded Fenroth to leave almost vampires Beufus and Cletus and their non-vampire brother Charlie where he found them, within the town. The barrier passed them by and once the full transformation was in effect, Dominic had three agents, (two vampire and one human) to use.

At first the men thought it was Dominic who turned them, since he was the vampire who summoned them once they woke up in their new lives. He sent them to retrieve Annabelle and Roland. They were to kill Eliza on sight. They failed and Cletus was killed by Eliza. Later Beufus was killed by Dominic, leaving Charlie alone.

Despite the deaths of his brothers, Charlie continued to spy for Dominic and successfully kidnapped the Foresight's friend, Henry. Charlie served his dark masters well and was awarded by becoming a vampire. He continued to serve Dominic for years. His fate is unknown at this time.
Posted by Scott Bryan at 8:00 AM No comments: Links to this post

Labels: Beufus, Cletus, Fenroth, Who's Who in the Annabelle Universe? Charlie

Too Late to Apologize: A Declaration

Too Late to Apologize: A Declaration

The feeling that sweels up in me when I watch this video is the reason I must write Night Children: Dark Revolution. I will show my pride and respect for these men and what they did through my writing. I always have felt passion for our nation's birth. I want to one day share that passion.
Posted by Scott Bryan at 11:39 AM No comments: Links to this post

In need of repairs

Some of the things on my blog could use some repairs. My Store page is terribly out of date. You can but my books both as eBooks and paperback. Also they are local at Starry Night Books.

I'm planning on fixing that page and others soon so watch for updates!
Posted by Scott Bryan at 10:08 PM No comments: Links to this post

Labels: updates, Where to buy my books

It was fantastic! Several people arrived and bought books. I signed each one. A couple came because of my appearance at the Junior High. Some friends came from work as well.

The biggest surprise was that people who I never met before bought my books. I brought four Dark Births and sold five (one as a pre order). That means the novel that started everything is actually in someone elses' home!

The woman who bought a copy of Threats and Birth returned to have them signed. I spoke to children, teens and adults, explaining the story and what makes it special. Afterward they had me sign copies and bought them. I really hope they enjoy them.

Another woman mentioned that her son doesn't like to read due to his learning disability. Despite this, he can't put my book down. When I showed the original proof to my wife Janeen last year, she suggested a better paper shade and font size due to others with reading disabilities being able to see it better. I'm glad she did!

So everything worked out well! I've been invited to do another when Starry Night attends the Benson Grist Mill Pumpkin Walk on October 12th. More information to follow! 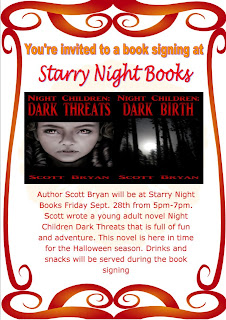 Posted by Scott Bryan at 2:51 PM No comments: Links to this post