Originally posted on 9/6/09 for the Charge of the Write Brigade.

It appears I posted my article a week early. Ah well. This gives me the chance to pen a quick letter of encouragement.

I understand you’ve had it rough. Word has filtered to me that you’re ready to throw in the towel.

I realize you’re tired of finding mistakes in your manuscript that previously were invisible. That you can’t believe the betas and the critique group members found something so obvious while you overlooked it for the last seventeen read throughs.

And then there were those constant rejections. You wonder if there is a single lit agent in the world who hasn’t passed on your masterpiece. It’s so easy for them, huh? You pour your life blood into this work and they don’t have the decency to look at it. Or maybe they did ask for pages and now you know they saw the glaring errors your betas pointed out. Ouch! 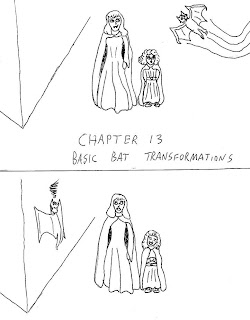 I need you to realize something. These problems are normal, they will happen again and even get replaced with other challenges. I don’t need to tell you that this is life.

What I do want you to do is think back. Remember when you got the notion for this book? Remember why you wanted to be a writer? Think on that. Remember the positive things your betas and critique group members said? It wasn’t all bad, was it?

Why would you build a wooden rocking horse for a child? Because you love her and want to see her smile and laugh. There is an end result you’re looking for. So you begin and work every day on it. Tiny slivers cut into your hands and you wince with pain (the smallest cuts seem to hurt the most). Do you quit?


How about when that child comes over on Saturday and asks, “Is my horsey almost done, Uncle Author?” What do you say?

You suck the tiny sliver spots on your hands and get back to work. You persevere. At some point you’re finished and she laughs and smiles and rocks the heck out of that beautiful rocking horse.

My point? When were down, we don’t know the future, keep at it. There is a certain period of time between painful creation and happy finished work. When I say “finished” I don’t mean rough draft stage or 5th revision, I mean the end of the road. For you and I that means published.

The gap between start and true finished is a long one involving many pratfalls. We have to remember our goals, reevaluate our plans and jump back into the work. Everyone has a reason to write. Focus on your end destination (like the happy child in my example) and push to that goal.

You’ve made it this far, why stop now?
Posted by Scott Bryan at 6:00 AM No comments: Links to this post

Labels: don't give up, Jack Roberts, persevere, stick to it

I'm going to schedule the rest of my articles from the Charge of the Write Brigade. http://writebrigade.blogspot.com/

Don’t you forget about me

Originally posted on 8/30/09 for the Charge of the Write Brigade.


Stephenie Meyer woke up after a strange dream about a love struck vampire and a mortal girl in a meadow. She quickly wrote down the dream as best as she could remember. JK Rowling pictured her main character while riding a commuter train and took no time to jot the ideas and concepts down on any paper she could find.

Like them or not, you can’t deny the impact both authors have had on the industry. If either one blew off their flashes of idea, where would their fans be now? Both introduced people to the world of books during an age of TV, video games and other visual forms of entertainment.

Writers have a gift. We have the talent for seeing interesting characters, places and situations where others see only what’s in front of them. Last time I wrote about the effect of music on inspiration but today I’d like to focus on what you should do once that inspiration strikes.

Ideas come from everywhere. A quiet campsite, a bubbling brook, a crowded city, the view from a plane window, a vivid dream, or even other’s creations can all bring ideas. We watch a show or read a book and a thought strikes us: “That’s all well and good but what if…”

I personally like a loose outline. Many don’t. In fact the writers’ website known as Absolute Write has that very question in their members profile info. Outline or no outline? Ultimately it matters not as long as you have a system that works.

Here is my system:

4) Refer back to notes when I reach that character or scene. 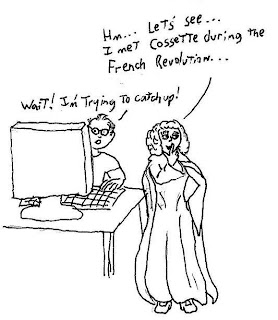 Let me explain the “Who’s Who” and “Timeline”.

For me, the term “Who’s Who” comes from DC Comics. Back in the ‘80s they published their “Who’s Who” over a twelve month period. Each issue featured their various characters. There was information on their full names, birth dates, death dates, eye & hair color, height & weight, history, powers & abilities and anything else that mattered. Marvel comics did the same thing but called it The Official Handbook of the Marvel Universe.


In my Annabelle’s Who’s Who, I don’t go into all that detail unless that stuff is worked out. I do include any information that is important to my stories. This might be their history, motivations, relationships or passions. When an idea for a new character or changes to an existing character strikes me I open the file and put it in.


My Timeline is a list of every major event in the lives of Annabelle and Roland from 1687 AD to the current time.

I’m writing a YA historical vampire fantasy fiction series. One of the reasons I placed Ann’s origins three-hundred years in the past was to have fun with history. As far as I can tell, every vampire story begins with a human from now-a-days meeting a vampire. The vamp isn’t the MC because we can’t relate with someone who lived forever. I beg to differ. Sure, I could be wrong but why not go with the dream?

So instead of beginning now and have my vamps say “Remember when the Salem jail was packed with dirty innocent people and we had to rescue that real witch?” I show them doing events in order of when they actually experience them. So the famous witch trails are touched upon in the first book, pirates and post-fire London in the second, and so on.

With this plan, I need a comprehensive list of where they were during the last three-hundred years. When a character or setting pops into my head, I add it to my Timeline. When I come across a particularly juicy piece of history, I put it in my Timeline.

When I actually write the stories, I copy and paste the notes needed into my actual story, then write through as the inspiration takes me, including the notes where they fit into the story.


This system works for me. What systems do you use to catch inspiration and bottle it up until you need it?
Posted by Scott Bryan at 8:33 PM 2 comments: Links to this post

Originally posted on 8/16/09 for the Charge of the Write Brigade.

The theme to “Edward Scissorhands” by Danny Elfman begins. My mind instantly travels to a dark Fall night. Eliza Pratchet walks purposefully with two children in red cloaks following behind. She’s taking them through the small colonial settlement for another lesson. Annabelle’s undead pulse quickens with excitement. Will they finally learn how to become bats?

At the point of the song marked 02:08 the soft eerie tempo starts to wave, like small bat wings. Ann and her brother flutter under the moonlight. Then around 02:59 the quirky march slows off to become a gentle ballad and I see her. I can’t help it. Her flowing red curls, the gleam of happiness in her crimson eyes, the gentle billowing of her blue dress and red cloak in the wind as she floats ten feet in the air. Annabelle’s inner peace, joy and love all moves through my soul.

That is what I see every time that song is played. Heck, even if we’re watching the movie, I see it. That theme will forever be linked in my mind as “Annabelle’s Theme”. If I could choose a composer for a Night Children movie it would be Danny Elfman, hands down.

Music inspires me. I can’t help it. Heck, I wouldn’t want to. It doesn’t matter if there are lyrics, or what style the music is. Certain songs send me off to other worlds.

My main antagonist, Dominic, commands attention as I listen to “The Kraken” from the “Pirates Of The Caribbean: Dead Man's Chest” soundtrack by Hans Zimmer.

“Love Song For A Vampire” by Annie Lennox puts me straight into Eliza’s mind as she cares for the dying children, ready to change them forever rather than let them die so young.

The list goes on and on. Some songs provide me with actual scenes from my series, like “Carpe Noctem” from the Dance of the Vampires soundtrack, “Journey to Transylvania” from the Van Helsing soundtrack by Alan Silvestri, the “Poltergeist” theme, “Libra Me” and the “Davy Jones” theme from that same Pirates movie.

Other songs create characters. “Original Sin” from the Dance of the Vampires soundtrack, “Moon Over Bourbon Street” by Sting, “Taste of Blood” by Mazzy Star, “Lucretia My Reflection” by Sisters of Mercy and “Transylvanian Concubine” by Rasputina have all created very interesting cast members.

Then there are those songs that simply put me in a vampire mood. “Cry Little Sister” by Gerard McMann, “Supermassive Black Hole” by Muse, “Go All The Way (Into The Twilight)” by Perry Farrell, “Bela Lugosi's Dead” by Bauhaus, “Bloodletting” by Concrete Blonde and of course the mack daddy of all vampire songs, “Toccata and Fugue in D minor” by Johann Sebastian Bach . 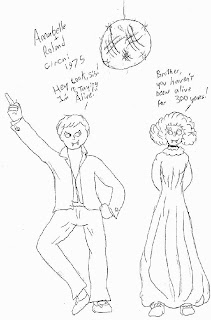 I’ve used enough quotation marks to allow this post to fly but I think I’ve made my point. Music can be a powerful tool for writers. Ever watch a movie and catch yourself leaning forward in your chair, not because of what’s going on, but because the music is telling you something bad is about to happen? Once again, the power of music.

It can show you the gentle parts of your story or the fast paced action sequence. Characters, settings and entire plots and subplots form in your mind as the songs continue. If you haven’t tried to use music before, give it a chance.

Think of the kinds of music you would expect to hear if your story was a movie. What songs really cover your theme? Then while listening to them, close your eyes and picture the scenes in your novel.

Not everyone is inspired by the same things, but if this works for you I’d suggest creating folder of music for your music player of choice. A soundtrack if you will. Then when you’re feeling writers block, play it and watch the scenes grow.


Sometimes when I need to be inspired, I’ll play the Vampire Folder on my media player.

I feel sorry for my coworkers. I have no clue why they haven’t yelled at me. Maybe because I turn it down? At home I have no fear. My wife and children support my dreams. My children are easily warped. I put on Scissorhands and they shout “It’s the Annabelle theme!

Happy writing.
Posted by Scott Bryan at 8:25 PM No comments: Links to this post