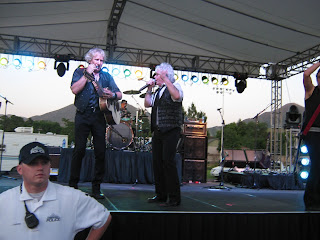 Air Supply came to my home town of Tooele to give a 4th of July concert. I've always liked their soft ballads, but to be honest I'm more of a fast type band than the slower love song type.

Boy was I wrong. Sure, I'd stumbled upon the last minutes of a Stray Cats concert in Oshkosh, Wisconsin '87, and I'd been to a stadium where Shena Easton sang for another 4th of July concert, but this felt like my first.

Janeen (my wife) is a huge fan so we arrived two hours early. When we first arrived, Sara and Dave ran down to where they were getting things ready but security asked them and my wife (who went to fetch them)to leave and wait on the sidewalk.

Janeen and Sara got Air Supply a "Hoops and Yoyo" talking card that said "Thank you" a zillion times. We love their humor cards. The night before Sara made two homemade wrist bands for them, too. Well Janeen gave those things to a security guy to give to Air Supply and they were promptly ushered out.

We waiting in the heat while the local dignitaries and Tooele royalty were allowed in. It was frustrating and we had no idea how these things truly work so we weren't sure if they got thier card.

Still, at 7 pm they let us in. We got settled and grabbed some food and the concert began. Their are two lead singers. A tall one and a short one. The tall one invited people to come sit near the stage and before he could finish his sentence Janeen and Sara were off and running. I assigned the valuables to Katie and joined them. 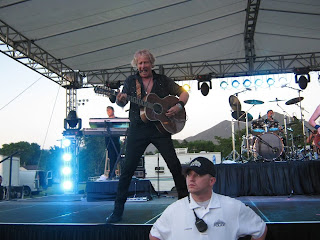 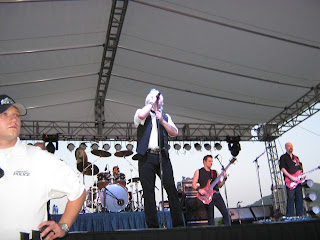 I discovered something! Just because a band sounds slow on the radio doesn't mean they can't rock. Very good band! They rocked out and we all got caught up in their spell. Before long the crowd were motioned to stand up and clap and Janeen and Sara did.

I wanted to join them, tried to get up (it was crowded) and accidentally snapped off Janeen's fake toenail along with cubicle and real nail. Ouch! She crumpled to the ground, her toe gushing. One of the lead singers motioned for the security guard to help. Neen was not to be removed! I don't blame her. So I went with them to the ambulance and got gauze to help her.

She got all fixed up but still hurts like crazy and I feel bad. She's a sweetheart though. She even forgives me!

This event did not spoil it for her or anyone. The band continued to rock out. The tall singer wore Sara's wristbands! The two leads walked through the crowd and Sara and my in-laws had a chance to shake their hands.

They returned to the stage and continued rocking.Soon the tall singer motioned for an audience member to sing to. He picked SARA! He motioned for her and Janeen to come up close. Boy was Sara's face red! And keep in mind, he had no clue she was the same person who made the wristbands. No idea Janeen and Sara did the card. 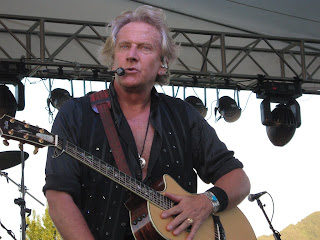 They rocked, finished, everyone called for an encore and they rocked again. Lots of fun. So does the story end? NOPE!

We regrouped the whole family to the grass for the fireworks. Laura and I left to get another blanket and Ibuprofen (for Janeen) from the car as well as dropping off the camera and such.

We return with water and find Janeen and Sara gone. I ask my mother-in-law where they are. Carolyn responds along with my daughter Katie that Janeen and Sara when to talk to Air Supply.

You need to understand some facts here.
1. It has been my wife's hidden passion to meet certain celebrities, Air Supply lead singers among them.
2. Tooele city said that there would be no visits after the concert.
3. Sometimes when you want something with a pure heart, and you have the inner fire that my wife and daughter have, miracles happen.

I mean, you should have seen Sara's face when everyone was told there would be no visits. She looked crushed. Tooele royalty could meet them, but the average Joe can't. Yeah, I know there wouldn't be time for everyone, but Sara was so crushed.

So, back to the story. It's dark, we're sitting a little ways off from their trailers and the two leads stepped out to relax a bit. Janeen and Sara exchange looks. "Shall we?" And they sneak past the security guards and walk right up to them!

I return with Laura and ask where they are. I'm told. I repeat it three times out loud with an unbelieving voice, "They went to meet Air Supply?" Carolyn and Katie had to say "Yes" several times as I just stood there.

Then I look at Air Supply's trailers and silhouetted with the lights behind them was my wife talking to the lead singer! My question turned to a shocked statement. "They went to meet Air Supply!"

Finally my long suffering wife who never gets any breaks cause she isn't with the "in" crowd, finally she could have her dreams come true! 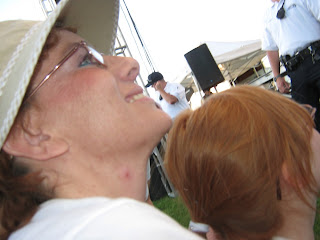 I found out later how they did it. They snuck up and walked right up to them. They simply said "Did you like your card?"

That tall lead singer took a double take! The same child he sang to was the one who made the bracelets and Janeen gave them the card! It all fit! Apparently they laughed before the concert for five minutes at all those "Thank yous" in the card.

It was perfect. Except Neen's toe, it was a dream come true.
Very happy tonight. :)
Posted by Scott Bryan at 1:23 AM No comments: Links to this post

I Get By With A Little Help From My Friends

Originally posted on 8/2/09 for the Charge of the Write Brigade.


Anyone who takes writing seriously knows it has a learning curve. Some of our friends, family and coworkers think that all you need to do is finish a novel and it’s practically published. They have the wrong assumption that the major task is the completion of the manuscript.

Back in ’04, when Annabelle hit me on the head and demanded I write her story, I chased after various resources to learn how to begin such a task. Several people told me the hard part comes after you finish the book. I smiled and said “Of course, of course”. From my perspective, a finished manuscript loomed in the far distance. I didn’t want to consider anything else but conquering that monolith.

For all of you newbies out there who are still trying to reach the top of your first literary mountain, stay the course, stop reading this article, open your document and finish the dang thing!

OK, are they gone? I don’t want to scare them into stopping their future creative accomplishment too soon.

Now, the rest of you who have reached the end of your first book might understand what I meant by “hard part”. Let me continue with my own story. Fast forward two years. It was now ’06 and a finished manuscript sat in my particular folder. I had a raw beginning, rough middle and uncertain end. I was ready for the next phase in my plan.

I selected ten people to beta read it. Some were online and local friends and two were teachers of the grade level that my YA book fit into. I sent out my baby and moved onto repairing the mess I made of book two. I whistled happily, knowing the flowers bloomed and the sun shone over my amazing work.

After a short period, my head snapped upward to see dark storm clouds. Thunder deafened me while lighting bolts atomized the flowers. Yes, my chosen ten did exactly what they should. They told the truth. They got out red pens and drew my blood all over the pages of my bruised baby.

I couldn’t be more grateful. Sure, at first it mortified me, but this novel means a lot. Either I think on what they said, or give up all hope. I couldn’t do the later so I pondered their words and what they truly meant. Changes were made. I drew the line in the sand on some topics while others I gladly sacrificed.

As time progressed I found myself trying more beta readers. Some were published authors while others had experience and knowledge in the subjects covered in my book. I found out later that a few still follow me on the web, checking up to see if I’m still striving.

I remember Adam’s comments and the fear they caused. Then Chris in England made some humorous points that stuck me hard. Aprilynne rocked me to my core. The list goes on and on. In ’07 I joined a critique group. Two of my fellow Brigade members were part of that group. With the combined abilities of two critique groups I learned a great deal.

Each review scared and later, after some serious pondering, excited me. The manuscript changed quite a bit and will continue to improve. I’ve taken something special from each review and learned a great deal. I appreciate everyone who has ever looked it over.

As writers we have the ability to loose ourselves in our work. We get so excited in our story and how it fits together that we want to rush out and tell the world. Some of us fear rejection; others get steamed when faced with opposing concepts that dare go against our vision.

The truth is, we’re far from perfect and need other’s frank honesty to improve.

3. There is nothing wrong with family and friends but remember they might not want to hurt your feelings.

4. Seek after English majors and teachers.

5. Try people who have been published and/or learned the pratfalls of writing.

6. Join or start critique groups. An assortment of voices can agree or disagree on where you need to change.

You are the final voice. What you say will always matter the most. Are you qualified to stand alone in your vision? Wouldn’t it be better to check first with others to be sure you know what you’re talking about?

I believe it was Steven King who said “You’ve got to kill your babies”. You have to give sometimes, but if you let others help, you’ll find greater possibilities than you ever imagined.
Posted by Scott Bryan at 6:00 AM No comments: Links to this post

I've had this on the blog page forever. I thought it works better as a single post instead.


visited 9 states (18%)
Create your own visited map of The United States or try another Douwe Osinga project
Posted by Scott Bryan at 6:00 AM No comments: Links to this post