They traveled together all night. Roland watched Fenroth closely, trying to learn from the experienced tracker.


“How long have you been tracking and hunting?”

“For the better part of eighty years. I was turned into a vampire shortly after I moved to this continent.”

They were running quickly through the dark woods. The moon lit up the path at certain intervals but Roland’s night vision made the moonlight unnecessary. Fenroth never turned into a bat or flew. Roland followed his lead because he didn’t want to look like a show off.

After a while of traveling at top speed and never quite catching up with Fenroth, Roland began to get tired. Suddenly the man stopped. He held up his right arm to signal for Roland to stop as well.

“Yeah. What is that? It smells stronger than the beavers and raccoons I’ve eaten.” The thin, musky odor tuned Roland’s nose. He could pick up the tasty aroma of lots of blood.

Fenroth nodded towards the moonlit stream through the brush where a bear drank greedily. “Watch closely.”


For more check out Dark Birth at your local online store. Links to Dark Birth on the web can be found on the Store Page.
Posted by Scott Bryan at 6:00 AM No comments: Links to this post

Who's Who in the Annabelle Universe? Eliza Pratchet 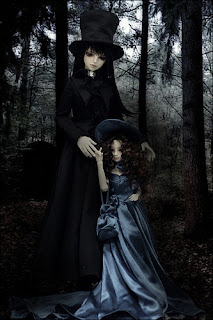 ﻿This is the closest I have to a pic of them.
artist:(if you know the artist, please let me know so I can credit him or her).
﻿Other names: Laila, Dear wife

Name Origin: Form of Elisabeth, "pledged to God." Variant, Liza, exists.
“Eliza” is her English name. Her real name is Laila, like her 4th great grandmother. She was named Eliza by her Grandmother Laila and she took it, quite honored.

Physical characteristics:
She appears in her early twenties, has long dark hair and olive skin like her fellow European gypsies, except it seems more pale due to her vampirism. She has long fingernails and wears long flowing black and white dresses and robes.

Personality: Very patient, caring, loving and kind. She walks and speaks softly and appears gentle unless you threaten her adoptive children, Annabelle and Roland Foresight. She gained confidence the longer she was with the Foresight children.

Abilities:
She has the standard vampire abilities. This means she’s faster and stronger than humans, her senses are extremely acute as are her reflexes. She can fly and turn into a bat. She has ability to transform into a wolf, rat, bat and mist. She can control humans through mesmerization and communicate with lesser beasts.

Born in 1589 a daughter of gypsies. She and her family were mortals whom traveled with the Mullo tribe, a family of vampiric gypsies. The tribe members, after a certain age where they might die, can chose the Right of the Dark and get turned so they can live on. Some stay mortal because they choose to while others desire vampirism.

Her 4th great grandfather, the vampire Nicu, died in 1591 defending the tribe and young Eliza in particular. A small group of evil vampires under Dominic’s command tried to slaughter them but Nicu drove them off, earning a steak to the heart. Eliza’s parents died as well. Her 5th great grandmother Laila raised little Eliza.

In 1609 she met Dominic. Eliza fell in love with him and he stole her away to America when he was back in Europe gaining supporters. Eliza carries a great deal of guilt over allowing Dominic to take her.

In 1692 she rebelled against him and saved Annabelle and Roland. She turned them into vampires. She teaches them because she at first felt sorry for them, because Laila taught her to help the downcast and because she loves them.
Posted by Scott Bryan at 6:00 AM No comments: Links to this post