Who's Who in the Annabelle Universe? Dominic Pratchet 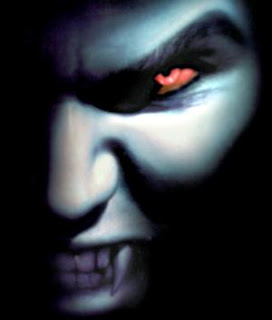 This is the closest I have to a pic of Dominic
"Vampire: The Masquerade" developer: Nihilistic Software publisher Activision
artist:(if you know the artist, please let me know so I can credit him or her).

DOMINIC: "Belongs to the lord." English name derived from Latin Dominicus. This is a name traditionally given to a child born on Sunday. His mother Lilith named him this as an insult.

Dominic possesses the abilities of all vampires, only perfected with thousands of years of experience. This means he’s faster and stronger than humans, his senses are extremely acute as are his reflexes. He can fly, turn into a bat, wolf, rat and mist at the very least and has complete control of others through mesmerization, perfecting it at a lever beyond any other vampire.

The vampire known as Domi seems to be as old as history itself. He has been behind all the terrible events of history and an advisor to various rulers through the ages. Throughout many cultures and eras there has been rumors of a powerful lord of the night who commands dark armies. His grim goal has always been to rule the world, turning a portion the population into food stock for those creatures he has deemed fit to survive. He has had many names, some lost through history.

Much of his personal history is shrouded in mystery. The vampire Annabelle has told me that she knows more and at the proper time she’ll reveal it to me. As the chronicler of her stories I’m extremely intrigued.

I have so many questions; if he’s so old, how come he hasn’t taken over yet? What is this Exodus War he was tied up in? How can he be the famous Romanian ruler Vlad the Impaler if we know Vlad wasn’t as old as Domi is supposed to be? What is his relationship with the Falabranwyn because every time he shows up, they do as well. Why does he have so many wives and who are the Three Queens? Who are the Seven Tyrant Lords? Why did he speak of future events as if he knew them?

I suspect we’ll find out together as Annabelle’s story continues.
Posted by Scott Bryan at 6:00 AM

Labels: Domi, Dominic Pratchet, Dracula, Who's Who in the Annabelle Universe

Thanks! Expect more every Tuesday.